It’s a basic tenet of narrative therapy that problems are tricky buggers. They take over our lives, drain our energy, and erase our imaginations. They can convince us that they are the truth, the whole truth, and that they are more real than any of the paltry solutions we might come up with. So they’re not only tricky, they’re greedy too. And the people I work with in therapy usually show up to my office with some serious suffering from these problems. They’ve often had the life, energy, and optimism sucked out of them by problems.

But as daunting as these problems often feel for me and the people I work with, my spirits are usually buoyed by my confidence in people’s ability to identify and work toward their preferences, despite the efforts of problems to keep them down. So even in the midst of people’s considerable pain and suffering, I remain curious about what they prefer for their lives and why it matters to them.

In light of this, much of my focus as a therapist is on helping the people I work with identify and build on their preferences. By preference I mean the choice of one quality over another, or one way of being, acting, thinking, or feeling over another, as in: “I’d prefer to show more interest in my children’s lives”; “I’d prefer to act grown-up around my peers”; “we’d prefer to replace bickering with caring discussions and genuine problem-solving in our marriage”; or, “I’d prefer to have more spiritual focus in my life.”

To identify and name a preference is a powerful step toward living the kind of life we want to lead. It’s powerful in at least four ways (and probably many more):

1. Preferences highlight alternatives. The naming of a preference helps us see that there are alternatives to an entrenched problem (and problems often take up so much space in our lives that they block out everything else).

For example, the preference stated above, “to show more interest in my children’s lives,” may have previously been hidden or crowded out by this father’s frustration with his children (that is, all he could see was frustration), his guilt over his own distance from them, or his helpless feeling of re-enacting the same tension-filled relationship he had with his own father. Such frustration, guilt, or déjà-vu experiences can be so overwhelming, so draining of energy and resources that they take away even the hope of a better way. Perhaps even worse, such problem-derived feelings can paint such a compelling picture of the situation that we become convinced that it’s the only picture in town; the only option or way of seeing. But even if it doesn’t seem very likely at the beginning, the naming of a preference puts an alternative out there for consideration and potential development. The problem is not the only game in town.

2. The naming of preferences brings them more into reality. Inspired by an image from the writings of Michael White, I like to think of problems and preferences as books on a bookshelf. The problem-books, with their fat, boldly lettered spines, have dominated and nearly filled the entire bookshelf, convincing us of their truth and comprehensiveness, insinuating that they’re the only story around. But naming a preference is like adding a slim little volume to the end of the row of books. It’s so slim that you can’t read its title without pulling if off the shelf, but its mere presence hints, whispers or even beckons to us that there are more stories to tell; more truths and realities to be explored; more alternatives to be developed. 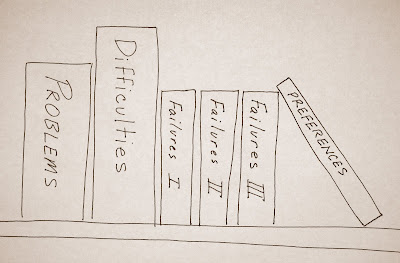 Forgiveness - Moving on from Hurt

Thomas had an affair.  Gina has embarrassed Carlos in front of their closest friends. LuAnn learned that Raymond wasn’t completely hon...

I'm a Marriage and Family Therapist and my primary theoretical orientation is Narrative Therapy. I find the ideas of narrative therapy and the conversations that develop with my clients to be so rich, so life-giving, and at the same time so practical, that I wanted to find a way to share those ideas with others outside the walls of the therapy office. I'd enjoy hearing from you.

Please note that this blog is not intended to provide therapy nor to be a substitute for therapy.