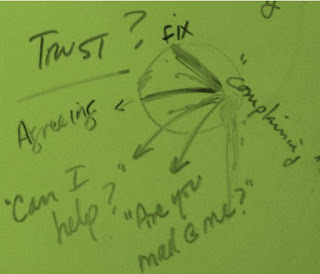 In an earlier piece I wrote about a couple who developed their ability to STOP when a difficult-but-familiar pattern was threatening to take their marriage down a painful, destructive path.
Their considerable efforts helped them to recognize, earlier and earlier, when they were headed in a direction that could easily spiral out of control. They learned ways to signal to each other that a break or time-out was needed, and they learned to reconnect when both of them had established a greater sense of calm. Their ability to do this helped establish a greater feeling of trust in the relationship: They could see one another working to protect the relationship rather than tear it down in a few moments of fear and fury.

In this piece I’m focusing on a skill that seems to go in the opposite direction of the “stopping” skill: the skill of continuing – that is, the skill of carrying on or continuing a conversation over time, picking it up again after interruptions. And it’s not just any conversation, but the kind that dives into the complex, often difficult patterns of the relationship. I’m thinking here of “hot” conversations. The kind that are so emotionally charged that if you come near them, one or both of you is likely to end up “burned.”

One of the couples I work with in therapy, I’ll call them Marie and Edward, drew my attention to this skill by something they did in their relationship that didn’t seem all that remarkable at first. They had a “hot” conversation and continued it over the course of two or three days: a conversation that arose in the midst of, and focused on, the emotion-laden, painful patterns that had so often tripped them up. The kind where they seriously irritated one another, where one was irate with the other for “doing that smirky thing again,” or for “always seeing me in the worst possible light,” or for “coming on too strong with the kids,” or feeling completely deflated and hopeless because the other was “distant and remote” again.

In the earlier part of our work together it was these kinds of conversations that would often precede Marie and Edward’s visits to my office. They’d have become stuck because of how one or the other had said or done something to “push” the other’s “buttons.” In short order, their responses to one another had led them to an all-too-familiar and all-too-painful impasse. Easy conversations would cease. Tension would pervade their relationship and then blanket the entire family. Unease and fatigue would stay with them throughout the day, and even their jobs provided little relief. Over and over again they’d make progress – they’d gain an understanding and make commitments to one another about how they would manage their emotions and be more thoughtful and open with each other – and then, after feeling better and working together for a while, they’d get caught again by “hot” patterns and feel demoralized all over again, wondering if they had ever made any real progress at all.

But then one evening in our therapy session, Marie and Edward described a “hot” conversation that didn’t get derailed by their strong emotional reactions. Nor did interruptions bring their conversation to a permanent end. Instead they were able to return to the topic three or four times over the next couple of days. The result was that they reached a point where they actually felt like they completed the conversation. They reached a conclusion or finishing point, like they had closed a chapter. They experienced a very satisfying sense of having talked it through, of having spoken and listened, of hearing and being heard, and of the conversation having moved them to a better understanding. This was in contrast to the more typical patterns of either ending the conversation in exasperation and the hopelessness of arguing the same point over and over and over, or ending the conversation by one feeling like they had to capitulate, saying something like, “okay, okay, okay; I get it; you’re right, I shouldn’t have done what I did; I won’t do it again,” which may have brought the conversation to a close, but left neither of them with much confidence that any progress had been made.

Four things stood out for me as Marie and Edward described those couple of days:

1. They found ways not to get stopped by overwhelming emotional responses to their difficult patterns.

2. They were able to pick up the conversation again and again after interruptions, from work, the phone, sleep, dinner, kids, e-mail, etc.

3. As a result, they gave themselves the opportunity to actually unpack and investigate some of the complexities and intricacies of their relationship, something that is nearly impossible to do if a conversation is cut short by strong reactions, or if insufficient time is given for a thorough look at complex patterns in the relationship.

4. And they gave themselves a chance to finish, to reach a conclusion, to agree in a peaceful, kind, calm way, that they had achieved a better understanding and were in a better place together.

HOW? A NARRATIVE PERSPECTIVE

Marie and Edward put a whole lot of effort into their relationship which helped them develop this ability to continue a “hot” conversation. From a narrative therapy perspective I’d say that, overall, their efforts added up to a different picture of their relationship: a picture that allowed each of them to respond differently than usual to their “hot” conversations. In particular, their efforts helped them to “see” or experience one another with more friendliness, more empathy, and more kindness, and helped them NOT to see each other as a threat against which they had to defend themselves.

Their friendlier, more empathetic and kinder pictures of one another led Marie and Edward to experience less threat in one another’s comments and questions around the “hot” topic. Feeling less threat enabled them to avoid the types of interactions that historically had increased the heat of their conversations – for example, by “being defensive,” “making accusations,” “shutting down,” “yelling,” or “pointing fingers” – and would end any chance of making progress on the issue. INSTEAD, they treated each other’s comments and points-of-view as “worthy of consideration” because they could acknowledge one another’s “good intentions” and “genuine care.”

Instead of seeing Marie as “demanding” or “controlling,” Edward could see that she was trying to express a fear or concern.

Instead of seeing Edward as “moping” or “stuck in self-pity,” Marie could see that he was feeling lost and heavily burdened by obligations and responsibilities.

These changed pictures, simple as they may seem in the descriptions above, resulted from intentionality, risk-taking, and learning-from-mistakes by both Marie and Edward. Here’s a partial account of their efforts, highlighting just a few of the steps they took.  (Note, these are just summaries of their efforts, rather than an attempt to document all of the steps that went into each of these changes; they describe where Marie and Edward “arrived” through their efforts, which helped them to be able to “return to hot.”)

Edward avoided assuming and guessing, and learned to ask questions instead.

Historically, when Edward would get nervous about something Marie was saying or doing, he would quickly jump to his own conclusions about her, and about what she was feeling or thinking or wanting. He then would respond to Marie, not based on what she was expressing, but on the basis of his own conclusion. Not surprisingly, this left Marie feeling misunderstood and trapped by Edward’s impressions of her. This tended to make Marie feel even more frustrated and raised the intensity of her reactions.

Instead, Edward learned to notice when he was headed off toward his own conclusions and assumptions. He learned to stop himself and ask Marie questions instead. And his questions were open-ended, so that Marie could explain herself and what was really going on for her, rather than having to answer “yes” or “no” questions rooted in Edward’s assumptions.

The result: Edward was able not to jump to the “worst-case scenario” in his assumptions, and not become quickly panicked, afraid and “reactive/resistant” to Marie. Marie felt more understood and treated like a real person with legitimate emotions, thoughts, wants and needs, and not as some monster-like figure that had to be defended against.

Historically, especially as she was growing up, Marie’s life had far more than its share of unfairness. She was also someone who worked hard to help others, especially in her family. But, having been taken advantage of in the past, and continuing to live with the residual fear of being hurt by others, Marie learned to pay attention to “fairness,” and “equality” in her marriage. And although this had helped her in many respects, Marie noticed that in her relationship with Edward, the focus on fairness was leading her to keep track of “every little thing.” She was keeping a tally, and she noticed that it made it hard to actually stay connected to Edward.

Marie decided that the way she became more distant and critical of Edward when she “kept track of fairness” wasn’t what she wanted in her marriage. But she also didn’t want to leave herself overly vulnerable: to being the one who would give and give and give, regardless of what she received in return. Nonetheless, she decided to take a chance. Instead of “keeping track” only in her head, she started doing two things: First, when she felt “unfairness” showing up, she would stop and write a note to herself about what the unfairness was; second, after writing it down, she would think about the particular unfairness and rather than “keep track” she would decide how much it mattered. If it was important, she would speak up and talk about what she wanted from Edward. If it wasn’t important (like, if it was a “feeling” of unfairness that upon closer inspection was based more on “fear” or “habit” than on anything that was actually happening), she would intentionally “let it go” and not “keep a running total of unfairness” in her head.

The result: Marie felt relief both from not having to keep so much in her head (that is, keeping a running total of how fair/unfair or balanced/unbalanced things were in her marriage), and from being able to actually address, “in the moment,” the things that really mattered to her. Edward also felt relieved. He felt less like Marie was “holding something over” him.  And he proved to be much better at hearing Marie’s concerns “in the moment” than when they were brought up well after the fact. Addressing “in the moment” concerns – when they weren’t yet “too hot” – helped them to change course, or to do things differently, if needed, or to apologize, if necessary, and to work together toward better understanding.

As Marie and Edward experienced success in these ways they were able to update their picture of what they wanted from each other. In one of our final sessions they each described and elaborated on this shared preference, a preference that now had become more and more of a reality in their marriage: a preference that helped them “continue on” – to see difficult conversations through to conclusions, despite interruptions. The picture was of a rock – a massive boulder that couldn’t be moved or blown away or shaken; against which one could rest; a steady, reliable presence. 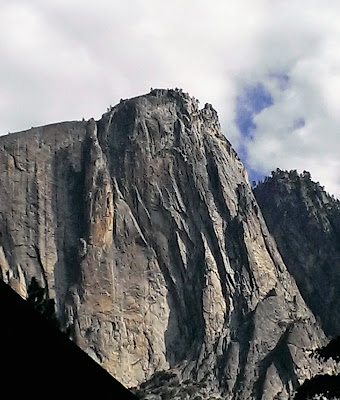