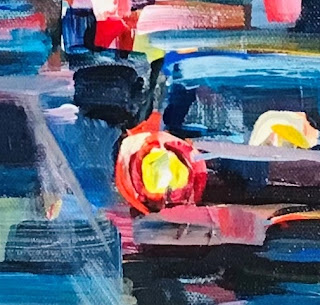 The will and ability to stop, to pause, or to take a break, stands out for me as one of the best achievements made by the couples I work with in therapy. This is Part 1 of a two-part piece on one couple’s work to interrupt a destructive pattern and opt, instead, for a preferred story of their relationship. ***
I was working recently with a married couple who were frequently stuck in a downward spiral of painful accusations, criticism, counter-criticism, frustration, and anger. At the end of such spirals the couple would feel overcome by a sense of themselves as being “incompatible,” “just too different,” or “not a good fit from the start.” At the bottom of the spiral they would be completely saturated by “our relationship is bad” stories, and by that point they would have a lot of evidence to support their conclusions. Thoughts of divorce would soon follow, as would feelings of loss, fear, and powerlessness. Through the years, with every new occurrence of this painful cycle, the couple would become more convinced that the downward spiral, with its defensiveness and recriminations was the “true” story of their relationship. More and more the good times were dismissed as uncharacteristic and irrelevant, and were even used against one another in the couple’s arguments.
Initially, our work in therapy helped the couple to get a clearer picture of how the spiral worked and how it undermined what they wanted in their relationship. But the progress they sought was still slow in coming. Along with a better understanding of the downward spiral we were able to document the many good qualities in their relationship that made it worth trying to find a way to break out of their destructive dance. And yet the harmful patterns remained entrenched. One day, however, the couple arrived in therapy talking about how much things had improved between them over the past month or so. I was eager to learn more about the steps they had taken to bring about the changes they desired, and our conversation provided a context for them to name and describe what they had accomplished, and how. The short version is: They stopped. They developed their capacity to pause and interrupt the downward spiral before it could, once again, suck them into its vortex. Here’s some of what they did to stop:
1. They recognized a “point of no return.” They both came to see that there was a point in their disagreements where the agitation and frustration, fueled by their increasingly negative thoughts about each other, were becoming so intense that to continue the conversation was almost guaranteed to make things worse. The signals of growing agitation and frustration included: pacing the room; her voice getting louder while his would become more measured, deliberate, and quiet; he would start telling her to “please stop yelling,” and she would tell him “I’m not being loud! Talk to me like an adult, not like I’m a four-year-old!” Their thoughts about one another were like these:

At their calmer times the couple came to the conclusion that once a difficult conversation passed a certain point, the conversation became an argument and took on a life of its own. They likened it to a forest fire that becomes so intense that it creates its own weather pattern, with driving winds that pull in everything nearby as it grows in heat and intensity and destructiveness. They also agreed that they were fed up and ready to stop.

2. Saying “Stop.” As their destructive interactions grew in intensity, it became more and more difficult for the couple to interrupt the process. Yet they found a way. After recognizing that there was a “point of no return,” the couple did the tricky work of finding a way to signal to one another that they needed a break.

I say it was “tricky” because it’s easy for partners to feel “controlled” or “blamed” or “belittled” when the other communicates the need for a break; like this:

Her: “I need a break from this. I can’t take it anymore.” Him: “Oh, so you think I’m out of control! Yeah, walk away! Just when we’re finally starting to talk!”

This couple became so tired of the destructive pattern that they reached a point where just the words “I need to stop” or “let’s take a break” were enough to signal the imminent point of no return and the need to take a break: to physically separate for a little while and then to come back together and talk, more calmly, about whether they were ready to continue their previous conversation in a more productive way.

[To honor and give a more complete picture of this couple’s hard work to get to the point where they could say “stop” and have it turn out well, in my next blog entry I describe some of the work they did to build and strengthen the capacities of their relationship.]

3. A willingness to trust the preferred story. It’s easy to get caught up in thinking that the problems of our relationships are more real than the good or preferred qualities of our relationships. But by saying “stop” and trying to interrupt the downward spiral, I see this couple as having cast their votes for their preferred story of their relationship. By agreeing to wait until a better time and place, and a better way to talk about their difficulties, the couple was saying that those better qualities were just as real as their problems. They were trusting, and risking, that if they took steps to stop the downward spiral (by resisting accusations and confrontations), and instead, to respectfully offer one another the time to regroup and refocus, they would be building a better relationship, one that was real and that was a better fit with their values than was their destructive downward spiral. In other words, they said:

“The good aspects of this relationship are real and are important to nurture. We nurture them best when we talk about our challenges and differences in a calm and friendly manner. We undermine those good qualities when we allow ourselves to be sucked into tension, suspicion, and hostility.”

They were choosing to construct or build their relationship around their preferences. They chose to prioritize those qualities that brought life, energy, respect, and love to their relationship, rather than relegating them to the “less real” or “less important” or “less honest.”