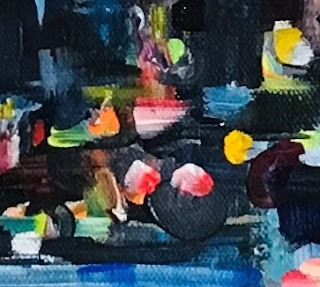 How can couples break away from those familiar conversations that get stuck in point-and-counterpoint, accusation and defense? Conversations where the content is lost to a frustrating, confusing process?
One answer might be found at the movies, in the voice of the narrator: that disembodied voice that speaks from outside the movie or on top of its action, that helps set the historical context, explains a key plot point, or conveys thoughts that would otherwise be only “in the head” of a character.
The voice of the narrator came to mind recently when working with a married couple, Maria and George, who were frustrated by a regularly occurring conversation that would lead to nowhere but misunderstanding, defensiveness and distance. As we looked closely at their conversation, what was both obvious and saddening, was how, in the course of their difficult interaction, they would drift away from their original good intentions. Those good intentions would get lost in the background, implied but never spoken.
This time their difficult conversation began with a concern expressed by Maria, which felt like a criticism to George. He then responded defensively, or self-protectively, or with a counter-criticism (they disagreed on the exact nature of George’s response), and the conversation went back-and-forth, and headed from-bad-to-worse. I asked Maria what her intentions were when she started the conversation earlier that week. Was she hoping for something in particular? What did she want to accomplish by raising the topic? Why was it important to her? What was her preference for how the conversation would happen?
Maria said her intention was to “connect with George, as a partner,” around an issue that was of concern to her (I’m not naming their particular issue here; feel free to insert one that’s familiar to you). Her hope was that George would be “open” to her concern, that he “could understand” why she was concerned and maybe even appreciate her for raising the matter. When I questioned her further she was able to cite occasions in the past when they were able to interact in this preferred manner, and she was clear that this was a strongly held preference, or preferred story, for their relationship.
Then I asked George about his preference for that same conversation. Similar to Maria he expressed his desire for “non-defensiveness,” “mutual care,” and listening with “openness” to one another, to build more understanding and closeness.
In that moment I was aware of how vastly different were the two conversations they described: the conversation that actually happened earlier that week where they got lost in the content and their reactions to one another – I’m calling it the “lost-in-the-process” conversation; and the second conversation, which didn’t happen that week, except in their descriptions, that was built around their intentions and preferences – I’m calling it the “intention-focused” conversation. The lost-in-the-process conversation had all three of us feeling sad and overwhelmed by the mess of hurt, fear, accusation and counter-accusation George and Maria described (and that they actually re-lived, to a certain extent, while they were describing it in session).
The second conversation, the intention-focused one, had us feeling more optimistic about Maria and George’s desire for closeness and connection. We were clearer about what they wanted and how they would like to talk with one another; what they wanted felt do-able, and certainly worth doing. In session I moved to the whiteboard and tried to visually depict the two conversations. For the lost-in-the-process one, I used back-and-forth arrows and words like “fear,” “hurt,” “vulnerability,” and “defensiveness” (words they had used) to depict the pain and stuck-ness they felt. It looked something like this:

Then I depicted their intention-focused conversation and wrote the words they used to describe their intentions and preferences: “clarification,” “talking about things that matter,” “tackling the tough topics,” “being open,” “being respectful,” and becoming “closer” in the process. It looked something like this: